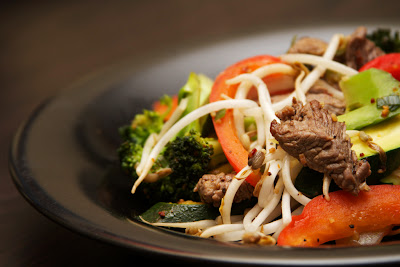 Always a simple dish that's really quick to make and loaded with veggies.  There's always a reason to insert steak into a meal.  :-D

I've long asserted that London does not have good food.  The city is dirty, it's old, it's overpriced.  During the entire 2.5 week long Eurotrip, I've been dreading going to London.  I thought it would be super crowded and I would just have to endure it.  I was wrong.  While we were there, we stayed in Millennium hotel in South Kensington.  The area was quite nice, wonderfully kept row houses, mother with the babies in strollers out for a walk on a fortunately nice day, not crowded streets but not empty either.  South Kensington has a great cluster or restaurants and one of the things I've always wanted to have was an authentic Yorkshire Pudding.  As we were walking, we found Bumpkin.  Bumpkin is restaurant that serves country food to city people.  All of their ingredients are British, fresh, seasonal, homemade and natural.  We walked in to a upscale casual and slightly rustic interior, their customers were everyone!  From young to old, families with children, romantic dates....it was Sunday night and the restaurant was packed. 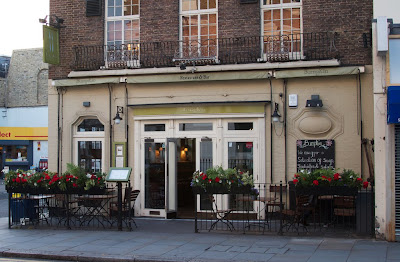 It was a Sunday so of course  there was a Sunday roast special...and guess what it had?  A Yorkshire Pudding!  It looked so good we both had to get this dish. 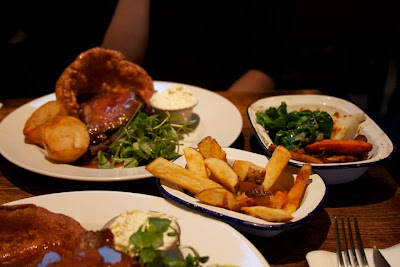 Everything was simply delicious.  It was such a simple meal but such a good one at that.  The Yorkshire pudding was light and fluffy, the beef was tender and flavorful, the beef gravy ladled on top was so delicious.  Nick loved the gravy even though he usually never puts gravy on anything.  The roasted vegetables were incredible and I wish I knew how to make it at home.  The parsnips and carrots were just slightly caramelized, and roasted cauliflower with baked on cheese is simple, but just divine.  Even the roast potatoes were done to perfection.   The hand cut chips was crispy on the outside, and soft on the inside.

This was definitely not a fancy meal, it's a hearty simple meal done to perfection.  There were so many things on the menu that looked delicious, such as the meat pies and duck legs....too bad we were just too full to try them all.

I would definitely make the trip to Bumpkin again the next time I stop in London.  This restaurant proved me wrong, there is indeed good food in London.  :-)
Posted by Cindy at 10:06 AM 2 comments: