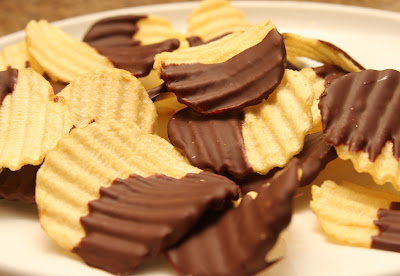 The first time I saw chocolate dipped potato chips was in the Narita Airport in Tokyo.  There were 8 chips carefully packaged in a plastic container that separated them and kept them from being crushed, then encased in an elegant black box.  They were also about 1200 Yen (which was about $13-14 Canadian dollars at the time) in which I made me jump and say, "Yowsers!", and then carefully place the box back on the shelf as if it was a glass vase, and backed away slowly.  I thought if I dropped the box I would break them and then I'd have to buy them.

A year later, the idea lingered on, that I could probably make them myself by buying a bag of chips and melting Lindt dark chocolate, and so I did just that.  The result: Crunchy, Salty, Sweet, Chocolaty, Creamy...it's bite sized happiness right there.  :-D  Anything dipped in chocolate is tasty...I've yet to prove myself wrong.

12-15 whole rippled potato chips (I prefer thick cut potato chips so that they don't break as easily)
HOW TO MAKE IT:
1) Line 2 plates with parchment paper or wax paper
2) Break chocolate bar into chunks and crumble into a bowl.  Microwave dark chocolate 30 seconds at a time, stirring after each 30 second interval, until chocolate is just melted and smooth (do not overheat, chocolate can burn).
3) Dip half of one side of a potato chip into chocolate, shake off excess until you can see the ripples through the dipped chocolate, and place on wax paper.
4) Put in the refrigerator for 20 minutes or until the chocolate has hardened.
5) Serve cold, don't let the chocolate dipped chips come to room temperature.
Posted by Cindy at 11:15 PM